St. Vincent of Lerins - On the Development of Catholic Doctrine 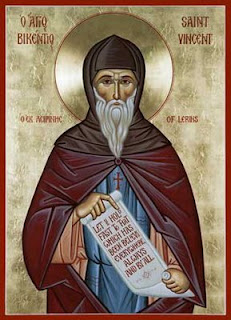 St. Vincent of Lerins is recognized by traditional theologians to be one of the best writers among the Fathers to treat of the question of tradition and change. The following passage is a brilliant treatment of true and false development in the Catholic Church, taken from his Commonitorium.
-----------

On Development in Religious Knowledge.

[54.] But some one will say, perhaps, Shall there, then, be no progress in Christ's Church? Certainly; all possible progress. For what being is there, so envious of men, so full of hatred to God, who would seek to forbid it? Yet on condition that it be real progress, not alteration of the faith. For progress requires that the subject be enlarged in itself, alteration, that it be transformed into something else. The intelligence, then, the knowledge, the wisdom, as well of individuals as of all, as well of one man as of the whole Church, ought, in the course of ages and centuries, to increase and make much and vigorous progress; but yet only in its own kind; that is to say, in the same doctrine, in the same sense, and in the same meaning.

[55.] The growth of religion in the soul must be analogous to the growth of the body, which, though in process of years it is developed and attains its full size, yet remains still the same. There is a wide difference between the flower of youth and the maturity of age; yet they who were once young are still the same now that they have become old, insomuch that though the stature and outward form of the individual are changed, yet his nature is one and the same, his person is one and the same. An infant's limbs are small, a young man's large, yet the infant and the young man are the same. Men when full grown have the same number of joints that they had when children; and if there be any to which maturer age has given birth these were already present in embryo, so that nothing new is produced in them when old which was not already latent in them when children. This, then, is undoubtedly the true and legitimate rule of progress, this the established and most beautiful order of growth, that mature age ever develops in the man those parts and forms which the wisdom of the Creator had already framed beforehand in the infant. Whereas, if the human form were changed into some shape belonging to another kind, or at any rate, if the number of its limbs were increased or diminished, the result would be that the whole body would become either a wreck or a monster, or, at the least, would be impaired and enfeebled.

[56.] In like manner, it behooves Christian doctrine to follow the same laws of progress, so as to be consolidated by years, enlarged by time, refined by age, and yet, withal, to continue uncorrupt and unadulterate, complete and perfect in all the measurement of its parts, and, so to speak, in all its proper members and senses, admitting no change, no waste of its distinctive property, no variation in its limits.

[57.] For example: Our forefathers in the old time sowed wheat in the Church's field. It would be most unmeet and iniquitous if we, their descendants, instead of the genuine truth of grain, should reap the counterfeit error of tares. This rather should be the result—there should be no discrepancy between the first and the last. From doctrine which was sown as wheat, we should reap, in the increase, doctrine of the same kind— wheat also; so that when in process of time any of the original seed is developed, and now flourishes under cultivation, no change may ensue in the character of the plant. There may supervene shape, form, variation in outward appearance, but the nature of each kind must remain the same. God forbid that those rose-beds of Catholic interpretation should be converted into thorns and thistles. God forbid that in that spiritual paradise from plants of cinnamon and balsam, darnel and wolfsbane should of a sudden shoot forth.

[58.] For if once this license of impious fraud be admitted, I dread to say in how great danger religion will be of being utterly destroyed and annihilated. For if any one part of Catholic truth be given up, another, and another, and another will thenceforward be given up as a matter of course, and the several individual portions having been rejected, what will follow in the end but the rejection of the whole? On the other hand, if what is new begins to be mingled with what is old, foreign with domestic, profane with sacred, the custom will of necessity creep on universally, till at last the Church will have nothing left untampered with, nothing unadulterated, nothing sound, nothing pure; but where formerly there was a sanctuary of chaste and undefiled truth, thenceforward there will be a brothel of impious and base errors. May God's mercy avert this wickedness from the minds of his servants; be it rather the frenzy of the ungodly.

[59.] But the Church of Christ, the careful and watchful guardian of the doctrines deposited in her charge, never changes anything in them, never diminishes, never adds, does not cut off what is necessary, does not add what is superfluous, does not lose her own, does not appropriate what is another's, but while dealing faithfully and judiciously with ancient doctrine, keeps this one object carefully in view—if there be anything which antiquity has left shapeless and rudimentary, to fashion and polish it, if anything already reduced to shape and developed, to consolidate and strengthen it, if any already ratified and defined, to keep and guard it. Finally, what other object have Councils ever aimed at in their decrees, than to provide that what was before believed in simplicity should in future be believed intelligently, that what was before preached coldly should in future be preached earnestly, that what was before practised negligently should thenceforward be practised with double solicitude? This, I say, is what the Catholic Church, roused by the novelties of heretics, has accomplished by the decrees of her Councils,— this, and nothing else—she has thenceforward consigned to posterity in writing what she had received from those of olden times only by tradition, comprising a great amount of matter in a few words, and often, for the better understanding, designating an old article of the faith by the characteristic of a new name.
Posted by MaestroJMC at 06:48

Wisdom is never fully attained in this life. We have now but a mere foretaste, a glimpse through a dark veil, a cloud of mist. We are travelers on a quest; we seek to attain this treasure of inestimable value, wisdom...

MaestroJMC
I am a traditional Catholic young man, pursuing graduate studies in philosophy at the University of Leuven, in Belgium, where I am specializing in ancient and medieval philosophy.

Father of providence, look with love on Francis, our Pope, Your appointed successor to Saint Peter, on whom You built Your Church. May he be the visible center and foundation of our unity in faith and love. Grant this through our Lord Jesus Christ, Your Son, Who lives and reigns with You and the Holy Ghost, one God, forever and ever. Amen.

Creator beyond human endurance, Who out of Thy wisdom'd treasures, didst establish three hierarchies of Angels, setting them in wonderful order to preside over the empyrean heaven, and Who hast most marvelously assorted the parts of the universe; Thou Who art called the fountain-head of life and of wisdom, and the one over-ruling principle; be pleased to shed the ray of Thy brightness over the gloom of my understanding, so as to dispel the ignorance in which I was born; Thou Who makest eloquent the tongues of babes, instruct my tongue, and shed the grace of Thy blessing upon my lips. Bestow on me keenness of wit to understand, the power of a retentive memory, method and ease of learning, subtlety for explaining, and a gift of ready speech. Teach me as I begin, direct me as I advance, complete my finished task for me, Thou Who art our Lord Jesus Christ. Amen. 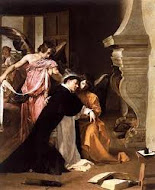 Almighty God, Thou who knowest all things, Thou who art without beginning or end, Thou who dost bestow, preserve and reward the virtues; vouchsafe to confirm me in the firm foundation of faith, to protect me with the indestructible shield of hope, and to adorn me with the wedding garment of charity. Grant that in justice I may be subject to Thee, that with prudence I may shun the snares of the evil one, and with fortitude patiently endure adversity. Grant that I may freely share what I have with those who have not, and that what I myself have not I may humbly seek from those that have. Grant that the guilt I have committed, I may sincerely confess, and the punishment I endure, I may bear with equanimity. Grant that I may not envy my neighbor his goods, and that I may always thank Thee for Thy gifts. In rest and motion, may I be always reserved! May I preserve my tongue from vain-glorious words, guard my feet from transgressing, restrain my eyes from wandering glances, withdraw my ears from the noise of the world, incline my head humbly, lift up my mind to heavenly things, despise what is transient, long only after Thee. Subdue my flesh, purify my conscience, honor the saints, praise Thee worthily, increase in blessings, and end my good works by a holy death. Implant in me, O Lord, the virtues that I may be toward holy things devout, in earthly duties prudent, in my behavior troublesome to no one. Give me, O Lord, heartfelt repentance, sincere confession, and the grace to make perfect satisfaction. Amen.